The Chor-su district of modern Tashkent is a crossroads of main streets. The Kukeldash madrasah rises above the elevated edge of the old city wall, to the right of a new mosque was built on the remains of ancient buildings, Khoja Akhror Vali.

Until 1954, there were an old madrasah and a mosque of Khoja Akhrar. Below was the city – Shahristan, with its bazaars, shops, houses of merchants and workshops of artisans.

The Khoja Ahrar Mosque was once one of the earliest Islamic structures in the city. The first building of the Tashkent Juma Mosque – the Main Friday Mosque, was built in 1451 at the expense of Sheikh Ubaidulla Khoja Akhrar (1404-1490).

Ubaidulla Ahror, a well-known Sufi at that time, the head of the Muslim clergy and a descendant of the Prophet Muhammad, preparing to move, ordered the construction of a large Friday mosque and madrasah in the ancient Tashkent mahalla Gulbazar. According to local legends, Ubaydulla got the money for the construction from the sale of “cutting threads”, which remain after cutting the fabric into standard pieces.

The Juma mosque served as the basis of the Registan ensemble in the area of ​​Chorsu Square. This Juma mosque was the oldest of 157 mosques in modern Tashkent.

In 1868 the mosque was severely damaged by a devastating earthquake. After 20 years, it was finally restored with funds (17 thousand rubles) released from the state treasury by Alexander III, which is why it received the name “royal”.

Subsequently, various political events of different historical periods led to the complete destruction of the mosque. The ruins were finally demolished in 1997.

Repair work and reconstruction of the Khoja Ahrar Vali mosque began in the 90s of the last century. The building was completely redone by modern architects, the cube was demolished, and instead of one dome, now the mosque is crowned with three.

In the middle of the 16th century, the Kukeldash madrasah was built to the southwest of the mosque. It is believed that it was built by the vizier of the Tashkent khans Barakkhan and his son Darvish Muhammad, nicknamed Kukeldash, which meant “foster brother of the khan” in 1551-75 in the traditional architectural style.

The surviving vaqf letter of Darvish Khan bequeathed a caravanserai in favor of the madrasah, which indicates the existence of a ready-made building at that time. At the entrance, behind the portal, on the left is a mosque, on the right – audiences covered with domes. The yard is spacious, surrounded by 38 khujras located along the perimeter and connected to the auditoriums, the mosque and open aivans.

However, time, economic crises, earthquakes at one time greatly changed the appearance of the building.

In the 17th century, the Kukeldash madrasah was used as a barn or caravanserai. As a result of the earthquakes of 1886 and 1946, it was badly damaged, as a result, numerous restoration works changed its appearance, the top of the entrance peshtak collapsed to the bottom of the vault. Only thanks to the builders, it was possible to literally restore the madrasah from the ruins.

The main twenty-meter portal of the madrasah has also been restored. The outer portal is decorated with majolica of traditional colors – blue, blue, white and ocher tones. Today, this acting madrasah looks elegant and well-groomed.

It has more than a hundred students who come here on a competitive basis. They have at their disposal educational premises, a computer room, a library, a calligraphy room, a sports room, a canteen, a hostel for visitors.

Many teachers themselves once studied in this madrasah. The period of study is 4 years. At the end of the educational process, graduates are distributed in the mosques of Uzbekistan, those who wish can continue their education in any of the country’s higher educational institutions. 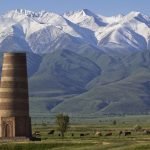 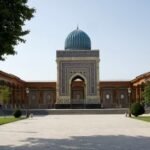 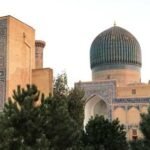 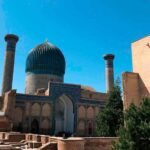 Find your trip to Uzbekistan

Tours to Uzbekistan from USA